Setting Up a Study With Adjudication

Understanding Adjudication and the Roles Involved

Enabling Forms to be Adjudicated

Assigning Records to be Adjudicated

Before getting started with setting up adjudication, verify the function is enabled for the study as shown below. 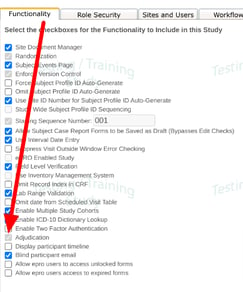 Three primary roles are supported in the process of adjudicating an event form as described below.

The three roles above will be discussed in this section. It is okay if your study does not have roles with the same names.

In order to set up Adjudication,  the Adjudicator/Moderator permissions must first be assigned to the corresponding roles. This is done within the study's Role Security settings.

Although a user role has the permission to adjudicate, it does not necessarily mean they will be doing so. Each user must be assigned to records as they are created in the study. This is covered below.

The Role That Will be Assigning Adjudication:

Enabling Forms to be Adjudicated

Once the Moderator and Adjudicator roles are set, the Form Properties area of the Form Builder is where the adjudication is defined.

1. First open the form that will need to be adjudicated/assessed. A common example is an Adverse Event form. In this example, the Adjudicator is the Investigator Role.  The form should not be available for adjudication until it's been saved with no errors. 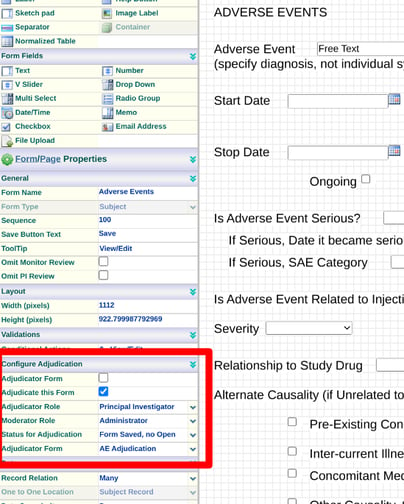 2. Next, open the form that the Adjudicator will be filling out. 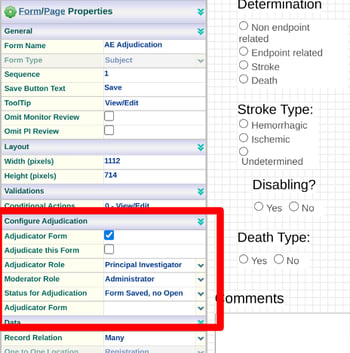 3. Lastly, select the choice field on the Adjudicator's form that will be used to measure or vote on causality. 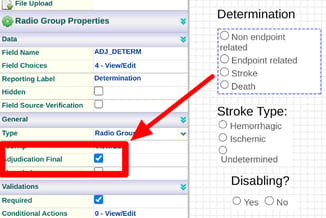 Read more about how to a assign records to Adjudicators as they meet the status requirements.