Query creation, routing, and closure are key components to drive the success of data collection. These processes help identify errors and provide more accurate data for reporting. This article covers how to interact with queries, how the routing works, and how to manage queries.

Use the following links to jump to a desired section:

Commenting/Posting a Message to a Query

Prerequisite: User must have permissions to manage queries.

Manual queries must be manually closed by a user with permission to do so.

Automatic (system) queries will automatically close based on data being corrected.

The Standard TrialKit Workflow of Queries

1. A query gets created - either by the system due to data entry or manually by a user. These will have the status "Attn: Site" and appear Red in color.

2. The query has a message posted.

Queries are only visible to a user if one or more of the following is met:

Query Distribution is unique to each query, but follows a default setting configured by the Study Administrator. Read more about redeploying queries below.

How the System Routes Query Status

When a query is created either by the system or by an Administrative type role, the status of that query will be Attn: Site

When a site type user comments on a query, the status will update to Attn: Issuer

Commenting/Posting a Message to a Query

Queries are the optimal way to handle contextual communications that pertain to study data, without the need for email or other external methods.

Query dialog windows can be opened by tapping the query icon on the eCRF or via the Queries Report. 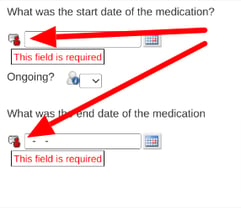 In the table that opens, there will be one or more queries listed, along with details of each, including which roles it was distributed (visible) to.

Tap the query link to open additional details as shown below.

Comment as needed to add a message to the query, then tap the save or post button.

The same process applies on the mobile app after tapping the query icon next to a field on the form. 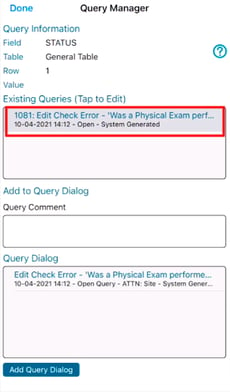 This process can also be done from the Queries Report, which allows the user to address all queries in one place without opening the eCRFs one by one.

When reviewing a form, an icon like below will display next to each field on the form.

If the field is being SDVd or a query already exists, that can be tapped as well to open the query creation form as shown below. 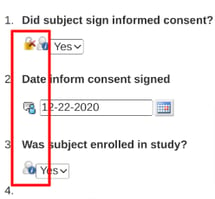 Following is an example where a query already exists on a field. Tapping the query icon opens the form to add a new one. Select the query type and use the description for the query message.

The Roles checkboxes indicate who the query will be visible to. This may be disabled depending on the configured study permissions.

You can also select the existing query in the table at the top for viewing its details as shown below. 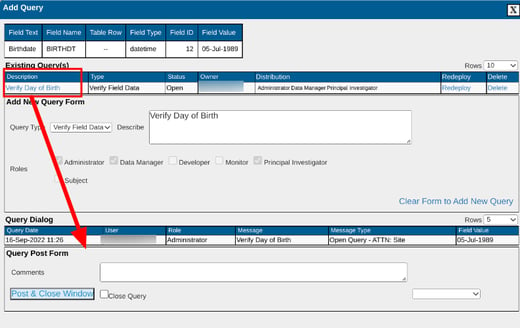 From here the query can be updated, commented on, closed or redistributed - depending on permissions granted to your user role.

By default, all queries will be distributed to the roles defined within the study configuration. Roles not included in the distribution will not see the query on the eCRF or in the Queries Report.

Queries can be individually re-deployed (redistributed), to different roles if needed.

Prerequisite: User role does not have the permission "Prevent editing role distribution" enabled within the Query Management permissions.

To redeploy a query, open the query window, select the desired query, select the roles needed and then tap the redeploy button. 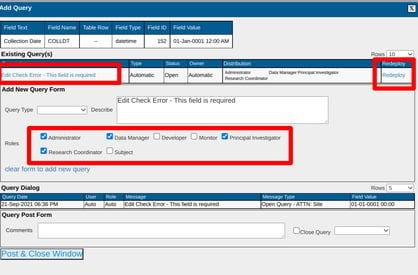 Open the query dialog window from the form or from the Queries report.

Select the query message and then check the box "Close query".  A reason is required (for the audit trail). The reasons available to choose from are configured by the Study Administrator.

From the Queries Report: 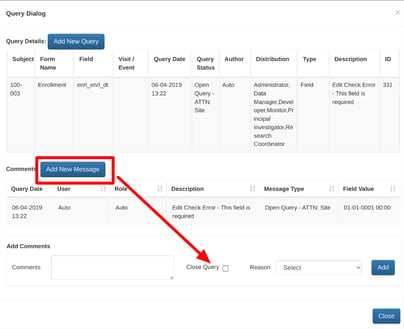 Closing manual queries authored/created by other users might not be possible if your Administrator has prevented that right in the role permissions.

If you have the ability to batch close queries, the author user or role-based permissions will not be enforced.

This report serves as a central place to both view and work with queries.

Column descriptions for the highlighted columns above:

The queries displayed in this report are based on two factors:

There are several filters to drill down to any subset of queries. A couple points to note about how filters work:

The query summary report is located under the Reports menu and provides metrics related to query statuses and ages.

The following metrics can be assessed from this report:

Unable to See a Query on A Form

There are two possible causes for this, starting with the most common: