Configuring one or more randomization schedules for a study

TrialKit is capable of randomizing study subjects to allocated groups for the purpose of assigning investigatory products accordingly without human intervention or bias. The allocations can additionally be used to drive conditional actions on which data points need to be collected for different subject groups.

In the table below, randomization has been configured and the form is available to create an additional one. 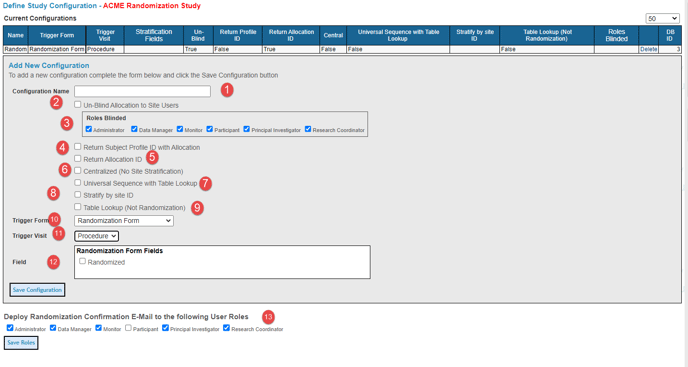 1. Enter a name for the randomization - this will be a reference shown throughout the system and exported data.

2. Un-Blind Allocation to Site Users  - Leaving this box unchecked will blind all user roles by default so they do not see the allocation to which the subject was randomized.

3. Roles Blinded - Individual roles can be unblinded by unchecking the box next to that role (Checked role = Blinded role).

If a new role is created in the study, later on, the role will be assumed as blinded and automatically added to the list of blinded roles.

Randomization blinding is supported by the system in the following areas:

For any fields in the forms which have been configured to populate randomization information or display based on a randomization group - it is the users' responsibility to blind accordingly. Blinded fields are enforced throughout the system, including in data exports and reports.

5. Return Allocation ID - This will provide an option for text fields in the Form Builder to define for populating the subject's Randomization ID into a CRF. This allows for maintaining the system-generated ID as the subject ID and still having reference to the randomization ID in the subject data.

6. Centralized (No Site Stratification) - Some studies may require that the pool of randomization allocations not be stratified by site. This removes the need for including the Site block in the randomization upload file.

7. Universal Sequence with Table Lookup - Used in conjunction with the Table Lookup option. Read more below on that.

8. Stratify By Site ID - If the randomization is not centralized, that means it is stratified by site.

By default, this site stratification will block subjects based on the sequence in which the sites randomize their first subject. In order to dictate specific site IDs for the randomization blocks, check this option.

9. Table Lookup (Not Randomization) - Used to bypass actual randomization and instead use the tool to apply a different subject ID format to stratified subjects, but where the subject ID is still in a universal sequence.

10. Trigger Form - Select the form where the randomization will occur.

11. Trigger Visit - Select which visit where the randomization will occur.

12. Field - Randomization Form Fields  - Select which field(s) randomization is based. These need to be the same stratification fields in the uploaded file described below.

Confirmation Emails are Un-blinding, so be sure the blinded roles (if applicable) are not selected here.

TrialKit users are responsible for creating their own randomization schedules. This is usually done by a biostatistician supporting the study. Randomization files dictate how TrialKit will distribute randomization allocations over sites or the entire study, depending on how the randomization is defined.

This section will explain the exact file format necessary to import a randomization file.  The file needs to be in a comma-separated (.csv) file format.

The following figure displays the file layout of the file to be imported into TrialKit.

Unless marked "(Optional)" the column MUST BE part of the import.

To upload a randomization file, select the "Import Randomization File..." option from the Study Menu. 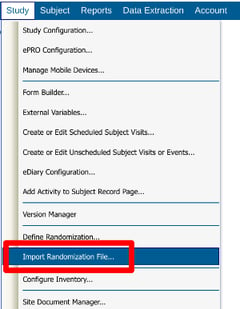 Select which randomization schema to import into.

After importing the file, a message will indicate if there were any errors in the file when applied to the defined schema.

The table below has 10 subjects and is 2-arm randomization. It is central randomization that returns no subject profile id and does no stratification (simply saving the randomization trigger form will allocate the subject).

Randomizing based on Site ID blocks with dual stratification, using the coded values for the stratification variables (found in the form builder).

The randomization file can easily be updated if needed. Do this by exporting the existing schedule, modifying it as needed, and re-uploading it. The system will only update ‘slots’ that have not already been filled, so it's okay if filled slots are part of the file when it's re-imported. This helps the user in verifying the proper spread of allocations, even if some have already been used.

For studies that use randomization, TrialKit allows study builders to dictate form logic according to where subjects are randomized. For example, each subject's randomization assignment can dictate if specific intervals, forms, or fields are displayed.

After defining randomization, the conditional action builder will display that randomization name as a constant. In the example shown here, a condition is being built on a field to hide the field if the subject is randomized into group 1. For group definitions, reference the randomization allocations.

There are two application permissions needed for the role that will be setting up randomization. 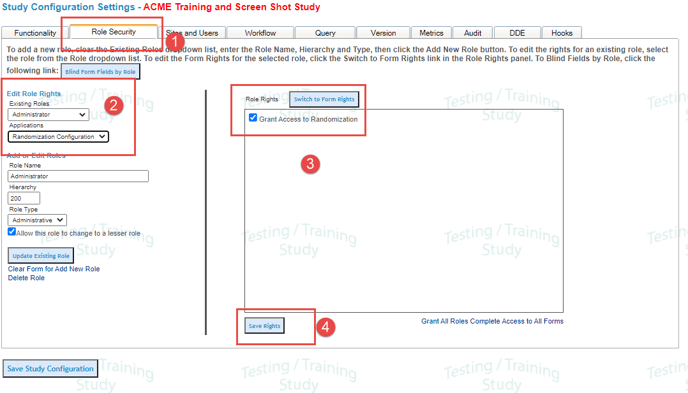 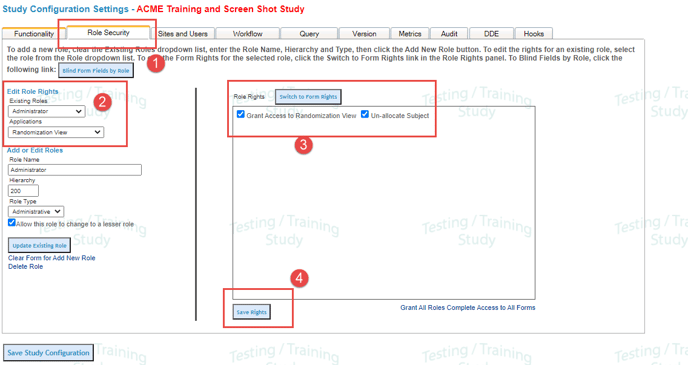 The ability to view randomization is considered unblinding. The person importing, viewing, and testing the schedule should be unblinded if the randomization requires blinding to most users.

View and Decode the Randomization Allocations

After randomization has been set up in a study, the allocation table can be viewed. With the appropriate permissions in Role Security, this page is found under the Subject menu: 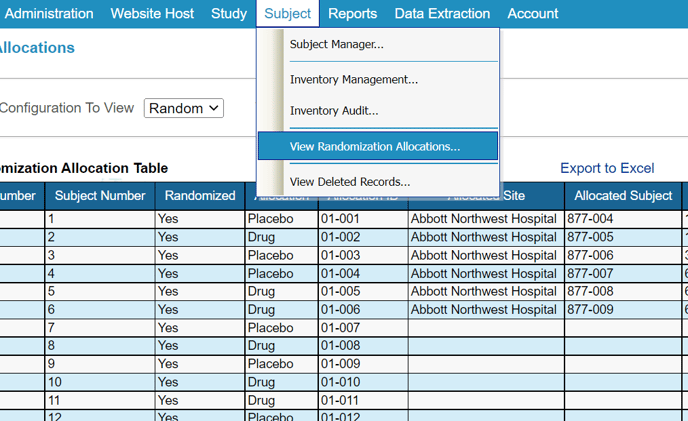 The following example shows the View Randomization Allocations interface that allows the user to:

3. If there is more than one randomization schedule being used in a study, the dropdown at the top of the page allows for switching between those schedules.

5. The last three columns in the Randomization Allocation data table contain the actual allocations including the site, subject, and date of allocation.

When a user saves a form that was defined for particular randomization, the system will find the next available slot based on the site and stratification(s). The system then claims that slot by assigning the user’s site, subject, and date of allocation to that slot. The system also associates this randomization allocation with the subject's visit. This information can be used to enforce randomization arms using Conditional Actions.

At any time, by selecting the Export link located above the Randomization Allocations data table, the user can export the entire randomization table to Excel. This gives the user a permanent archive of exactly how the randomizations were allocated for the duration of the study. It is also a method for updating the file, where additional randomization slots can be added to an existing schedule. Note, if editing or adding to a schedule, only empty slots can be modified.

Below are all the same functions accessed via the Mobile App:

A user with the proper permissions to open the randomization table (shown above) can  individually clear existing subjects from the randomization slots they exist in. For Example, a study may have a withdrawal that requires that allocation be re-used by another subject, or accidental randomization was made.

This action is not audited by the system, so it should only be used with an understanding of its impact on the study.

The study permission to deallocate subjects is needed to perform this action.

On the Web Browser, it can be done via the Unallocate links in the randomization table.

On the Mobile App, it can also be done in the randomization table by swiping left on any row within the table. An “Unallocate” button will appear on the right side. Tap on the button to complete the action.

It’s usually advised to maintain the randomization schedule as it was designed and keep all slots, even if they aren’t needed anymore (e.g. a subject was randomized accidentally and the slot cannot be re-used). This can be done by filling the slot with a ‘placeholder’ subject and updating the subject’s ID to something that will not ever exist for a real subject, like “01-005ZZ” where “ZZ” is appended to the end of the ID. Then delete that subject. It will still fill the randomization slot and prevent a real subject from re-using it.

The alternative method is to unallocate the subject from the slot that needs to be removed and then update the randomization schedule by re-importing it (explained in the sections above).

Use the randomization to0l for applying different formatted IDs based on variables in a specific form.

A common use case would be for screening subjects, where only some subjects (the ones that passed screening) need a different formatted ID.

For example, screened subjects might get an ID like "037-001" when registered in the system, but if specified criteria (stratification) is met, the ID needs to have a different format like "037-20001". Then if the next subject does not meet any requirements, they end up with 037-002. So formats change but the sequence remains in line.

In this example the randomization file uploaded would look something like this: