How to blind (hide) data to specific user roles

User roles can be blinded to specific fields within forms so the data is not visible when entered by another role or when data is being computed or populated which needs to be hidden.

Where Data Gets Blinded

Field blinding is supported on all common field types, but not within normalized tables.

When a field is blinded, there are several places in TrialKit that enforce that blinding, when the blinded role is accessing any of the following areas:

There are two ways to blind data to a user role. Both are described in the remainder of this article:

Specific data can be blinded within forms. Blinded is cross-platform compatible. In other words, if the form/field is configured on the web or mobile app, it will be enforced on the other platform.

First select the role that needs to be blinded, then open the blinding options:

Then select which form and fields that need to be blinded to the role indicated on the right side of the screen:

Tap on a field within the form builder, and then open it's properties: 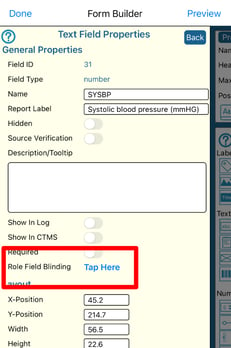 From their tap on the roles that need to be blinded, taking note of the field name displayed at the top to verify the correct field is being set up:

Tapping 'Done' at the top will save the settings. There's no need to save the form within the form builder.

It might be necessary that certain roles should not be able to view an entire form. This is easily handled with role security settings, form permissions.

Form view permissions are enforced within subject casebooks and the Queries Report, but not in all the places where field blinding is enforced (e.g. Data Exports). For that reason, it might be necessary to also blind the fields on the form if the user role has access to data exports or other reports.

Select the role to configure, and then form rights button: 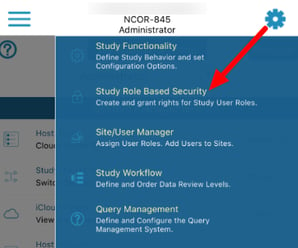 Tap the role to configure and then form permissions option:

From there, select which forms should have view and/or edit rights for that role.