Setting Up and Running Ad-hoc Reports

The Report Builder tool provides a means of pulling specific variables or measured outcomes together into targeted listings for a quick view of data that needs to be reviewed, tracked, or made available to specific user roles - including study Participants. This is an alternative to exporting all the data and then needing to filter or report on it outside of the system.

If your user role has been given access to one or more reports, they will display in the table of reports. From there, they can each be run.

Tap on a report to highlight it, and then use the Execute function at the top right: 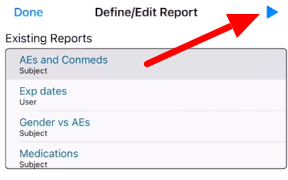 Running Reports for a Given Participant

The same reports can be found from within each Participant's casebook, but with an added capability of automatically filtering the data for the respective Participant.

From the Participant’s casebook screen, access the reports from the right side (web browser only): 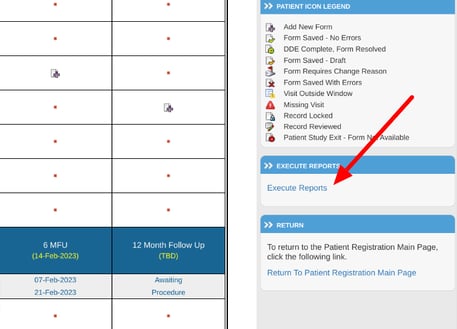 The creation of a new report first involves defining the basic parameters: 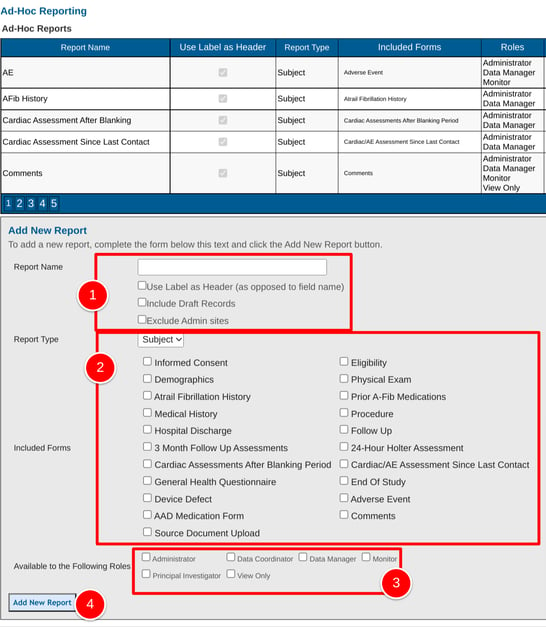 1. Name the report and choose what type of data to include.  The name can be any name with a maximum of 100 characters. The report name is displayed when the report is executed so the name should be representative of the data in the report as closely as possible. Options of what to include:

3. Select which role(s) to make the report visible to. This assumes the selected role(s) also has access to the report builder. User roles that don’t have the ability to define their own reports will need reports created for them and deployed to their role.

4. Save the report to populate the table. Now the report can be set up with specific data and filters as described below.

Blinded fields are supported in the report builder when reports are run. If a report includes variables that are blinded to certain roles in the study, and if those same roles are given access to run the report, they will not see the blinded data. 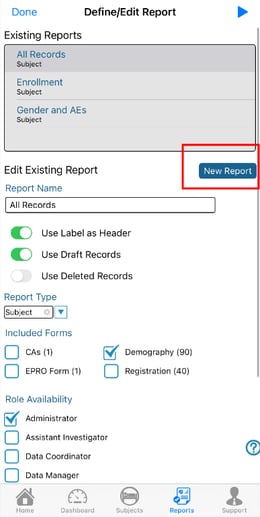 Clicking the Setup link will display the Report Setup page. From the top, select which form to work with. From the list of available fields, add them to the 'Included' column. Do this for each form that was included in the report. Holding down the shift key on the web will allow for selecting/moving multiple variables at a time. 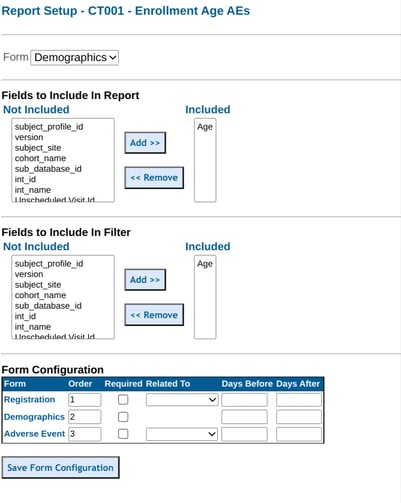 The same can be done for filters that need to be made available within the report.

Tap and drag fields from one table to the other. 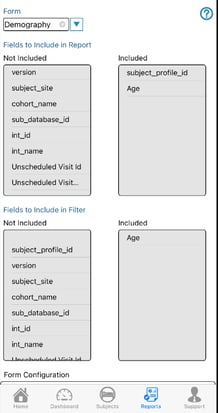 Joining data from multiple tables can cause confusion if the user building the report is not considering the relationships of data and how they should be joined together.

TrialKit uses a Left Outer Join method. This is opposite of the Standard Join in that a table row will still be included in the report even if the joined table has no matching row. for example if Participant ID from Demographics is being joined to the Heart rate value on the Vitals form, and the vitals does not exist for a given Participant, The Demographic data will still display as a row in the report. Alternatively if multiple Vitals have been entered for a given Participant, the report will repeat the single Demographics data for each row so that it can show the multiple vitals records.

An example here is when wanting to view something like Demographics (collected once) to Adverse Events (collected many times). When joining variables from both tables, it should be expected that for a given subject, the Demographics data will show repeated down each row based on the number of rows of Adverse Event records that also need to display.

Things get a little more complicated when relating data from two forms containing many records per Participant. A good example of a "Many to Many" relationship is when comparing Medications to Adverse events.


Here's an example of a subject with two AEs and 2 related CMs: 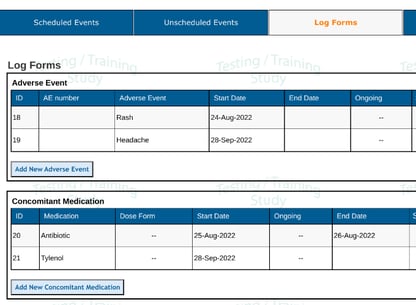 Building a report without setting up the form configuration, the output ends up giving four rows of data (one for each record):

From the above, it's hard to see which CM each AE is related to. This is where the form configuration comes in. It can be updated to this:

With the above, the system is being told that each CM is related to an AE if it occurred within four days of the AE.

With access to setup reports, existing ones can also be modified via the "Edit" option on each report in the table. This can be used to update the basic parameters of the report:

To only modify the variables shown in the report, use the "Setup" option.

Users will only be able to access reports if the reports have been made available to their role within the report configuration as described in the section above.

Points Regarding Report Visibility for a Given Role