Triggering an ePRO form (event) based on a specific condition in another ePRO form, and then conditionally terminating the event

Within the context of ePRO forms being collected from study Participants, the two conditional action types "Event Trigger" and "Event Terminate" are very powerful in deploying a conditional form based on a specific response in another form.

Example: A Participant is filling out a daily diary and indicates their headache is "Severe" out of several options. That response will trigger an "Event" where a follow up form is deployed every X number of minutes, hours, or days until the Participant indicates the headache has either stopped or reached a lower severity level.

Select the Event Trigger type and then set the following properties described below: 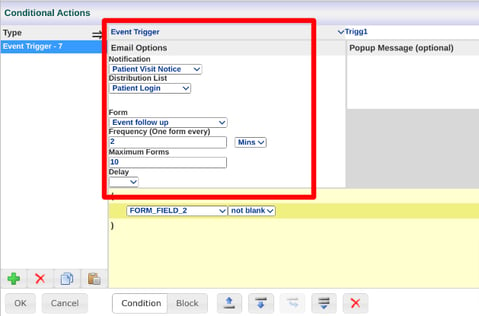 Form to trigger - A form which already exists in the form library and gets filled out by a participant user (ePRO form). If no form has been created yet, stop here and create that form first.

Frequency at which to deploy the triggered form after the trigger condition is met.

A frequency below 10 minutes may not function depending on the use case.

Notification - When the event is triggered, which notification message should be sent to the ePRO subject. Notifications are separately pre-defined.

Distribution List - Which distribution list to use for deploying. This must contain the subject/patient user role in order to be subject specific where the notice only goes to the subject and not to all users under a role.

Delay - Discussed in the next section

This is not required but can be useful if the triggered event needs to be initially delayed based on some external value for the given subject where the event is getting triggered.

For example, a followup form needs to be triggered based on some condition in another form. That followup form should be deployed ever 12 hours for up to 5 times. Additionally, the cycle should not begin until next week (7 days from when the event is initially triggered).

The granularity of the delay value is in minutes. So if an external value is "3", that will be treated as a 3 minute delay. If 3 days is needed, but you don't want sites to enter days as minutes, then set up an auto computed value to convert the site-entered days into minutes.

If no delay is required, leave it blank. In this case the event will begin based on the frequency value and time unit.

The number referenced for a given subject's event will determine how many Days later the event should begin deploying the triggered forms.

If an event trigger CA has been saved on a form, deleting it should be done with consideration of the following points:

Similar to the event trigger, this action will terminate a given event.

Select the Event Terminate type and the set the following properties described below. The conditional action can be on any field within the form, but usually makes the most sense to be on the field that is serving as the condition. This makes it easy to find later if reference is needed.

Name - The name for the current terminate CA. This can be anything.

Trigger Form - Which form triggered the event that now needs to be terminated.

Conditional Action to Terminate - The name of the Conditional action that was used to start the triggered event that is now being terminated.